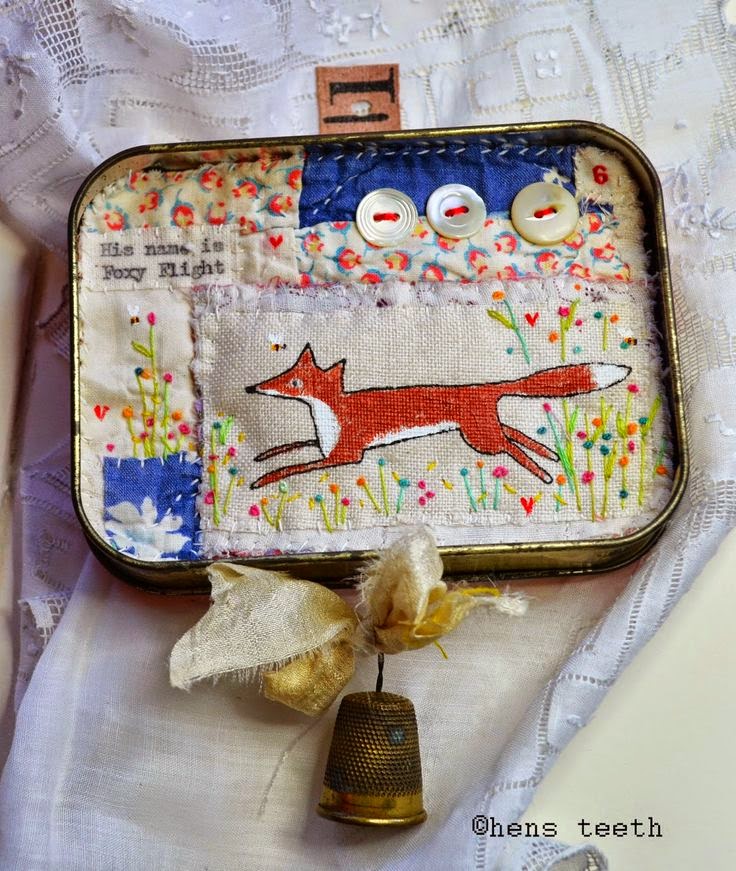 Viv Sliwka's work is characterised by an exuberance of detail created with bright splashes of stitched & painted colour on time faded fabrics & papers. Handstitched coton-a-broder threads become stalks, flowers or loose-limbed knots covering the surface of vintage scraps of patchwork, enriched with red threaded buttons and handprinted motifs. Of course to many, including her huge online following, Viv is better known by the name Hens Teeth.
Viv's passion for vintage textiles, haberdashery and paper ephemera is clear. This marriage of materials is described on Viv's CV as, 'A celebration of the decorative union of transient snippets from the past'. It raises these textile scraps from obscurity to a happy, decorative place.

Viv's work is populated with figures and creatures such as dogs, rabbits and donkeys so for this reason the only white collar to be stamped with the Old England brand lion motif was given to her. The Old England brand was established in the 1890's and became the official shirt makers to the British army during the Boer war. By 1957 the company was rebranded as Peter England, a name we're more familiar with today, and the lion logo went through a series of design changes. By coincidence Viv discovered that she had a card of Old England spare buttons in her collection with a matching lion motif so it seemed that the collar pairing was meant to be! 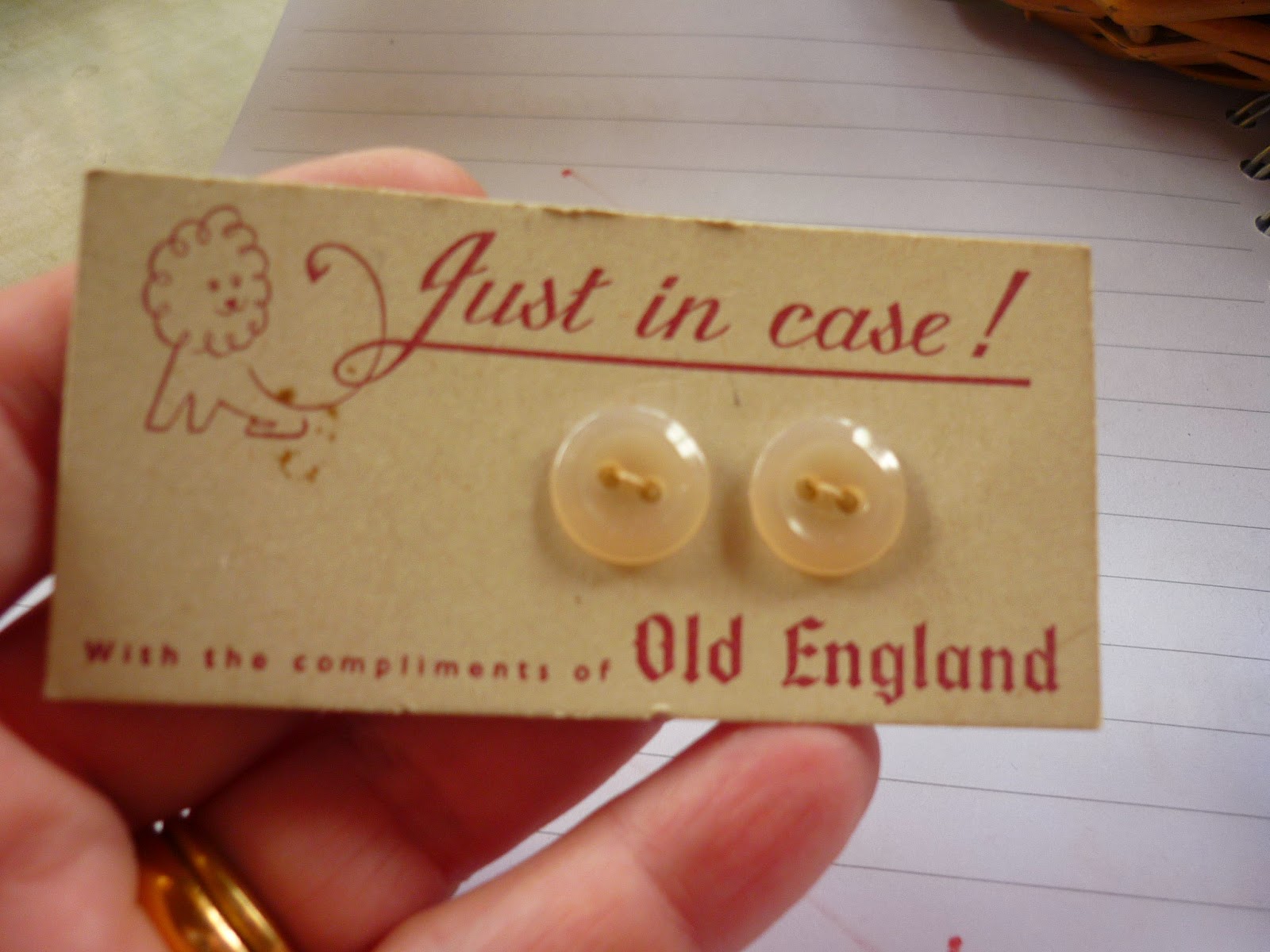 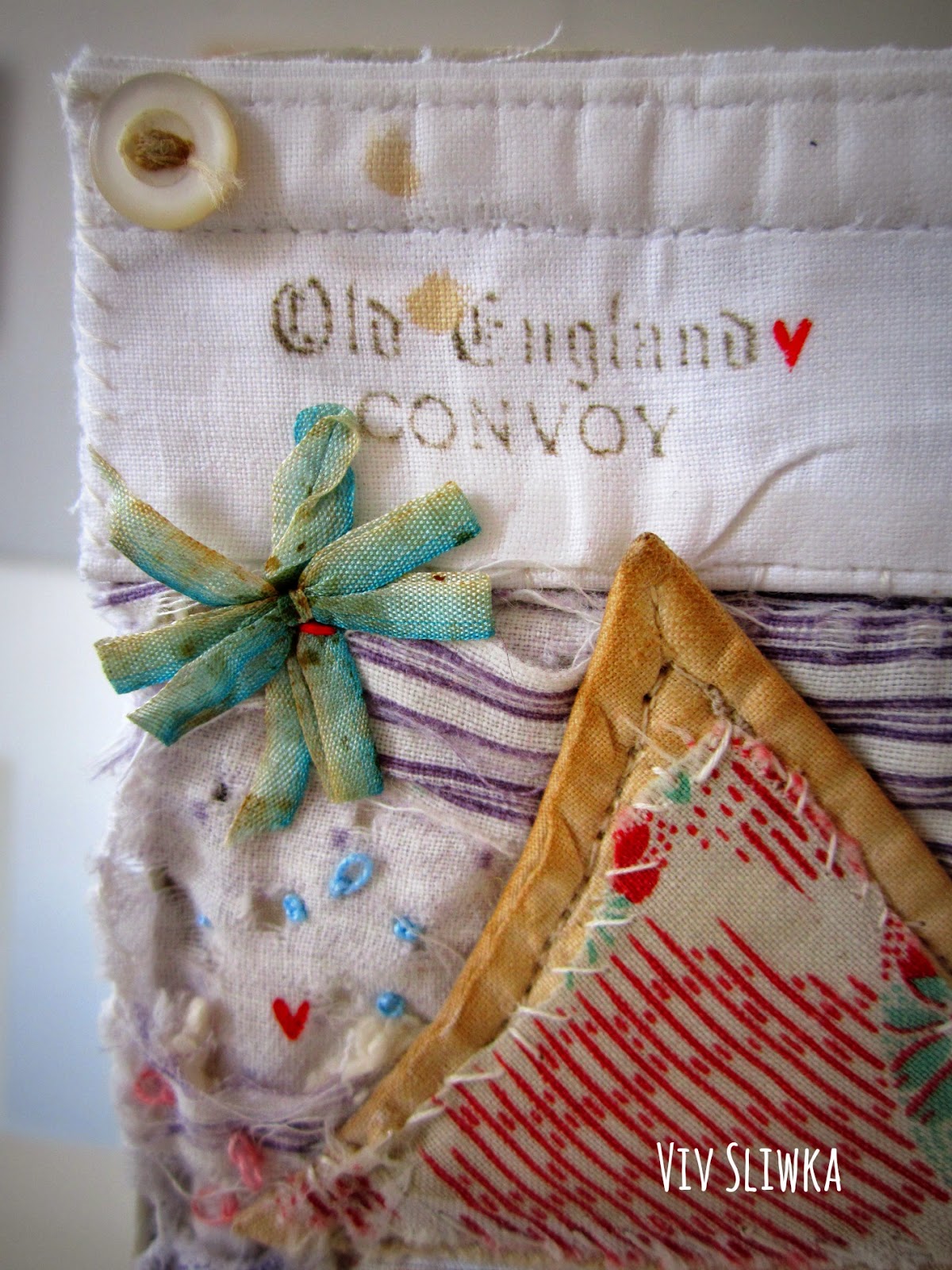 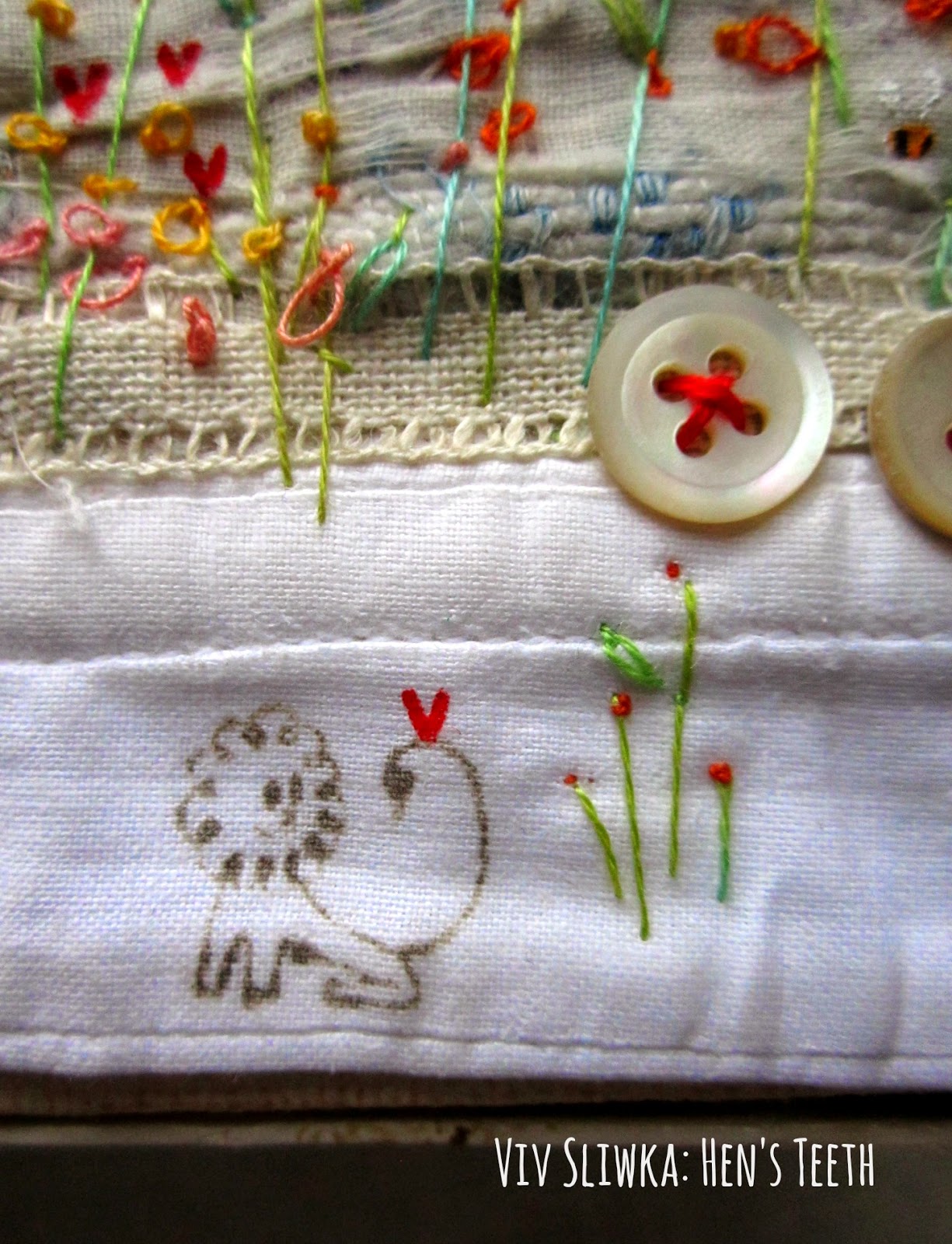 Viv has utilised as much of the original collar as possible without the desire to maintain the collar shape. One of only two collars in the project to be deconstructed, Alice Fox's piece being the other. Viv has combined her collar pieces with a background patchwork of fabrics in her identifiable style which show the discoloration and fraying of age. The apearance of age is further enhanced with the use of tea staining on the collar wing tip above. 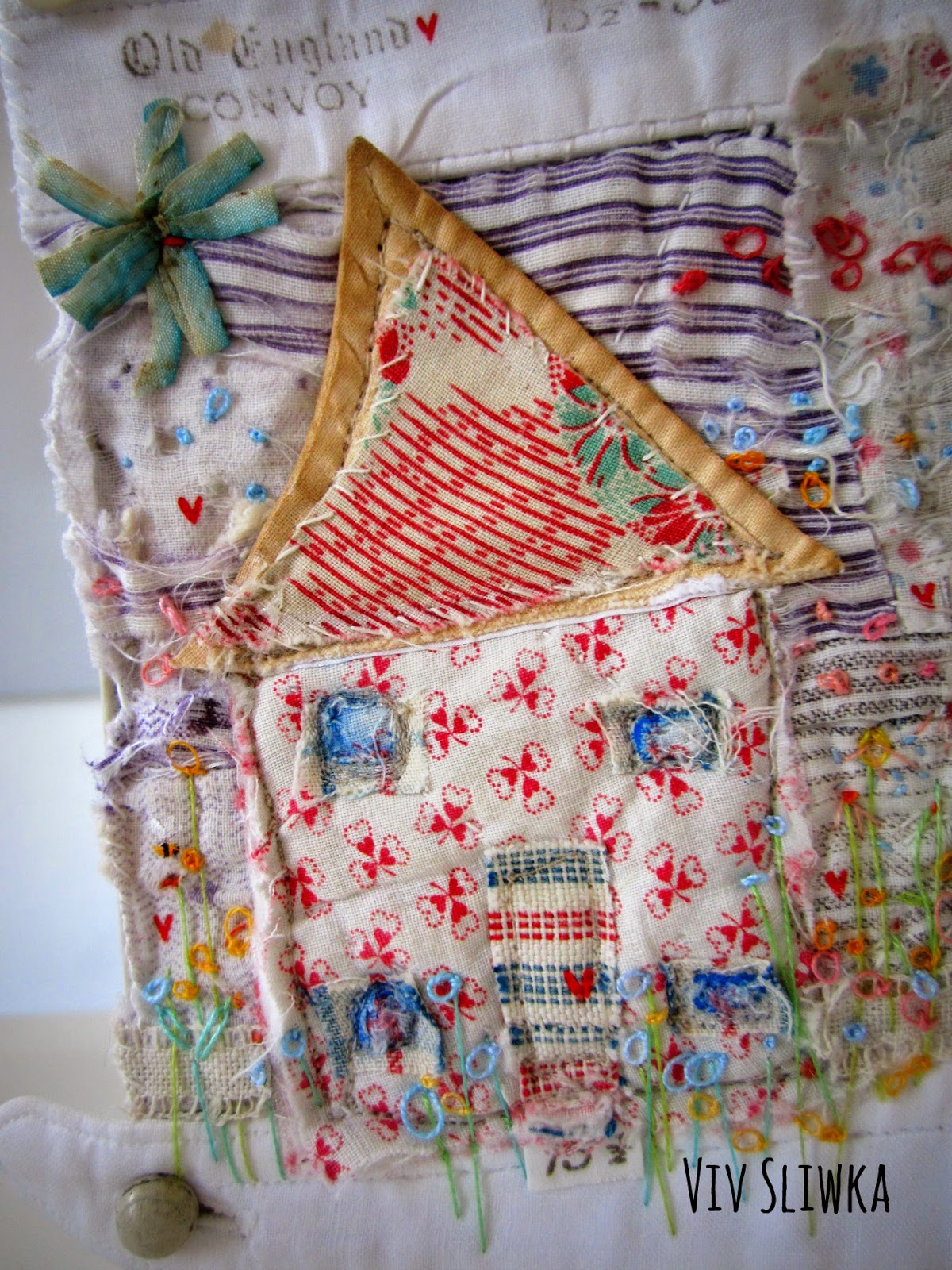 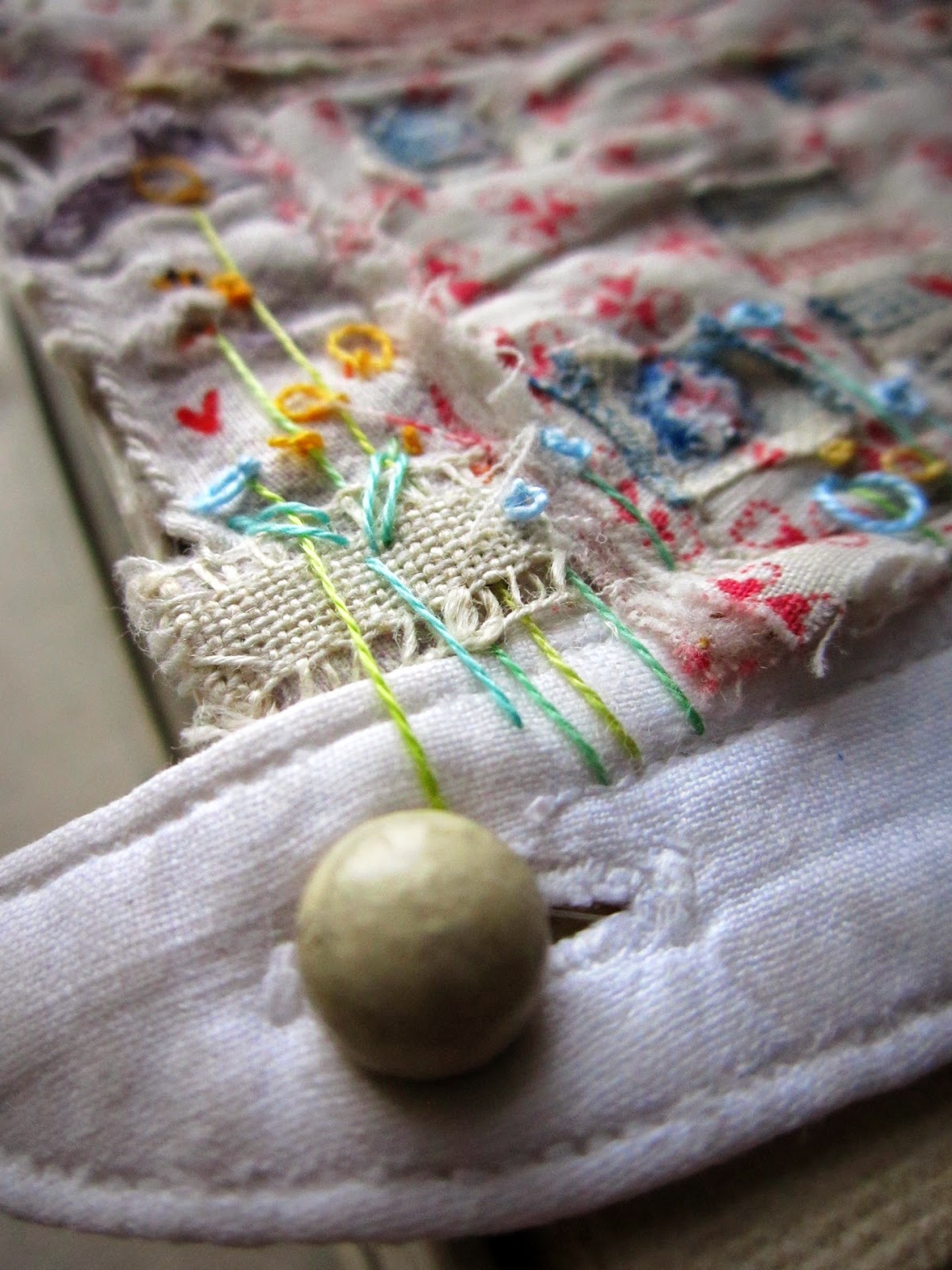 Although no longer collar shaped, references to it's original function are many - from the white collar stud to the button hole edging. Fortuitously, Viv found a vintage collar box which she used as both structure and backdrop - the original box remains visible and unchanged on the reverse of the finished piece. 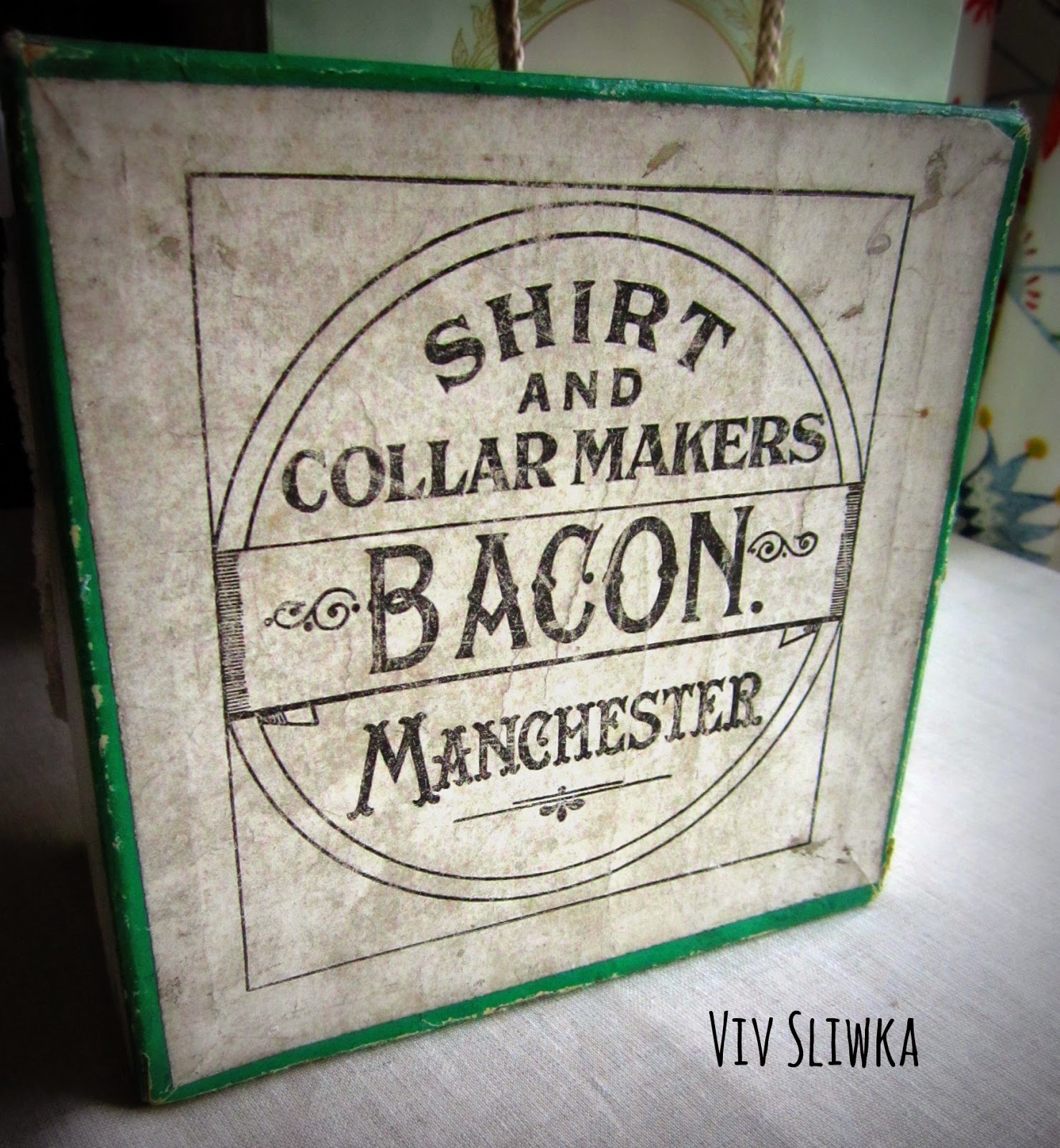 Hand painted bees & hearts of miniscule proportions are recurring motifs for Viv. If you have the opportunity to see this collar piece in person you can have fun trying to find out where Viv has placed six tiny bees. 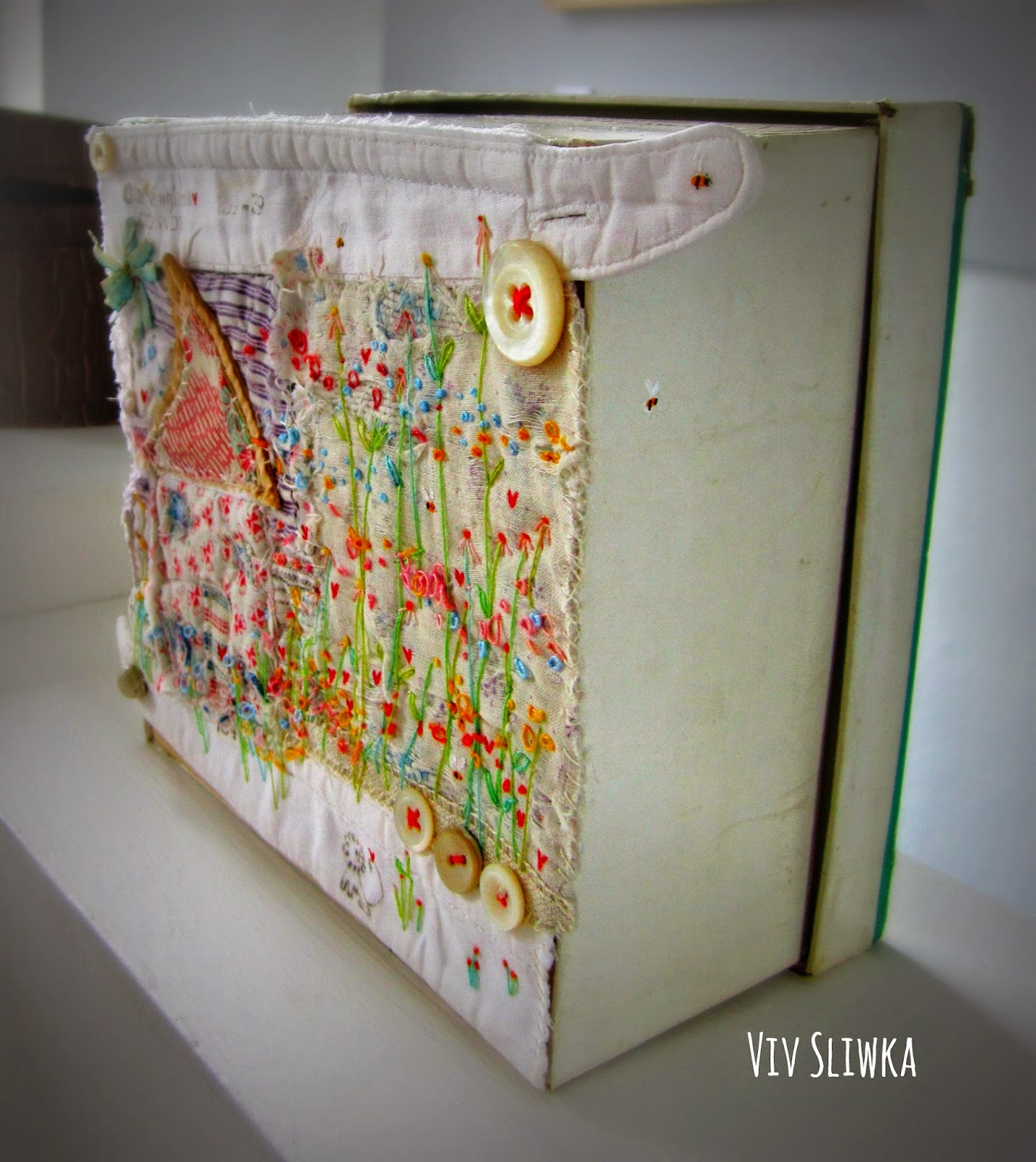 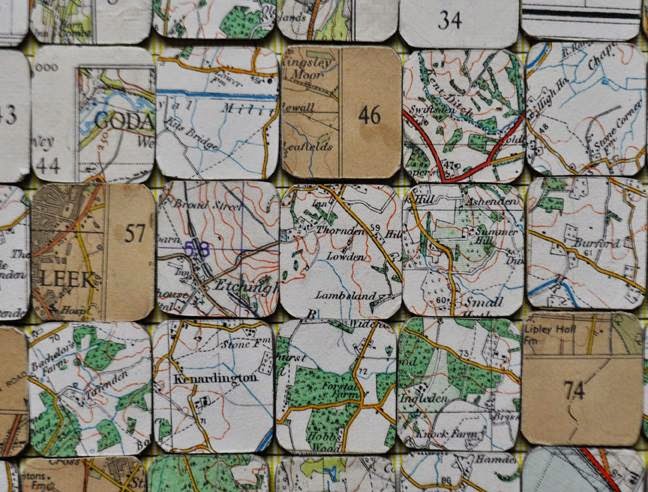 c. Sharon Hall Shipp Group Gathering artist Sharon Hall Shipp is one of 80 artists from across England to be commissioned by art organisation, Woolgather, to make a limited edition artwork for it's Vend project. The challenge of this commission has been to make work in quantity and of a suitable size to fit into a small plastic ball. These small pieces of art will be available to buy via vending machines this month for the princely sum of £1! "Woolgather have commissioned new works from artists across the UK and are using vending machines to provide a platform for their practice whilst also developing an audience and consumer for the works. Art Vend offers people an art experience amongst everyday life, by placing the machines in public venues such as shopping centres, bars, cafes and at public events, the hope is to maximise the chance of reaching people who may not usually engage with the arts. Ultimately the aim is that the product received will provide a more 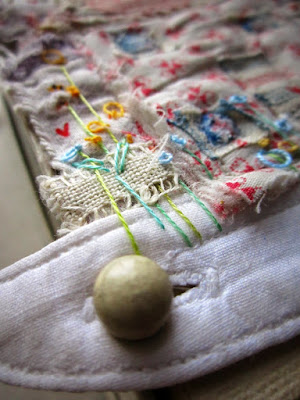 Detail Shirt Collar piece: Viv Sliwka This post is directed in particular towards our current and future subscribers; those of you whom have signed up to receive an email notification each time a new post is published. Although it won't hurt for non-subscribers to read too! Please take the time to read and if you no longer wish to hear from us, take the action suggested below. This month across the UK and Europe a new piece of legislation, General Data Protection Regulation (GDPR), came into effect. Briefly, these new rules are designed to protect and make transparent the digital information which is held about you as an individual and the information which you receive. So how does this affect visitors to A Group Gathering website? Firstly, if you haven't visited the site for a while you will see a pop-up message from Google, who hosts Blogger.com, explaining their use of cookies (those bits of technology which store information about your preferences each tim 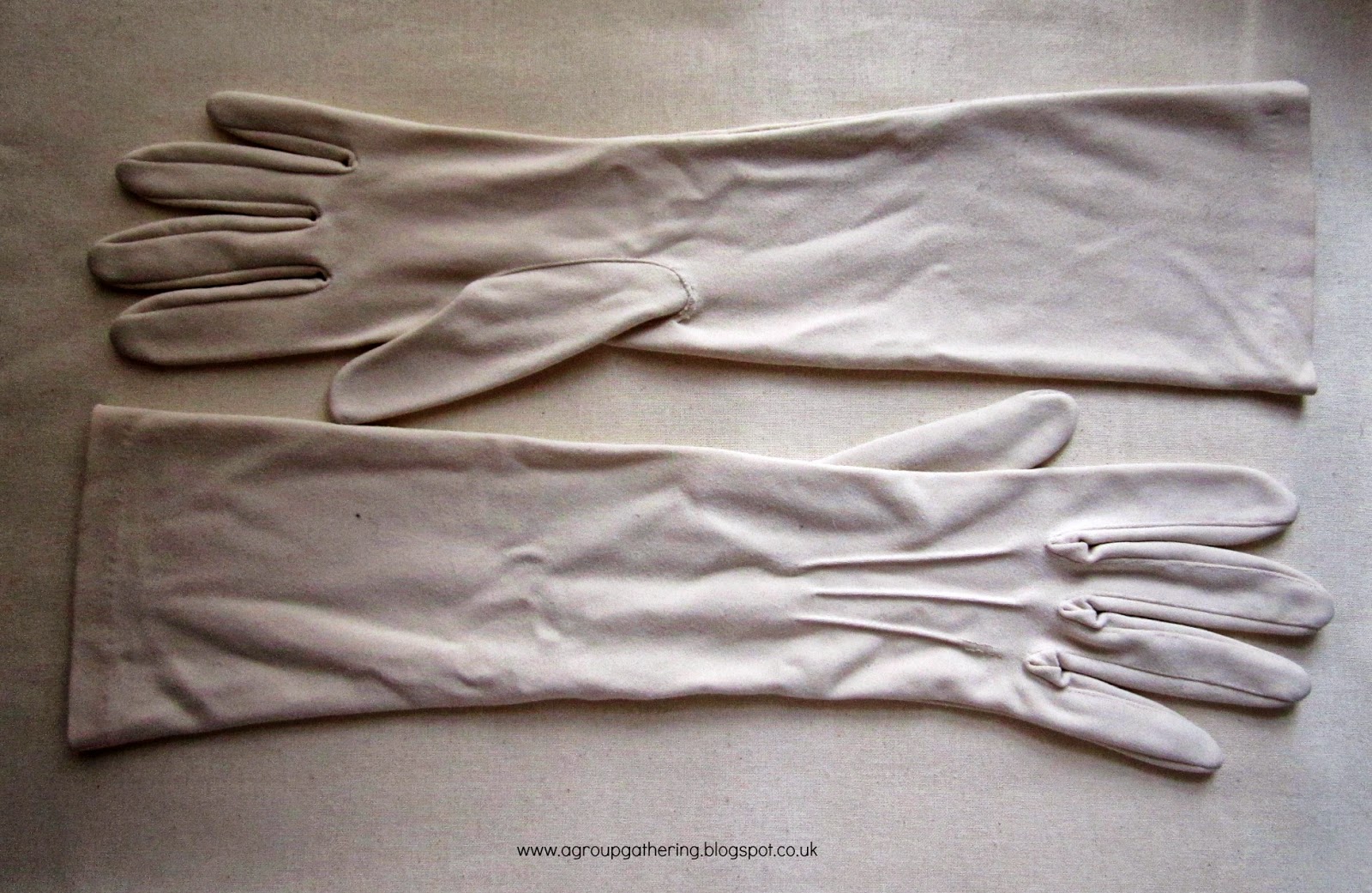 Back in 2013 when the project invitations were extended to the first Group Gathering artists (the Shirt Collar Project) they were also given a brief and told about the base material they would be working with. From this they could make an informed decision about whether to take part or not. The 2015 project artists were not given this luxury - the invited artists agreed to take part without knowing what was going to be asked of them. A brave bunch.   This week they found out. Each artist received a small parcel of items and the following instructions:  "In your parcel you will find a single, pale glove and some Cash’s woven name tapes. This is the base material to be used in a piece of artwork made by you as a participating member of the 2015 Group Gathering project. There is a partner to your glove which has been given to another of the project artists. At the end of the project the glove pieces will be reunited in an exhibition.  At this point you don’t know who your